Abstract
Objectives: The role of Fe accumulation in the brain is still a matter of debate. The present paper reviews the post-mortem data in cerebrovascular diseases.
Methods: Although there are several post-mortem techniques to show iron accumulation in the brain we only present the results of studies with 7.0-tesla magnetic resonance imaging, using the GRE T2* weighted sequence, and those with particle-induced X-ray emission.
Results: Hemorrhagic as well as non-hemorrhagic cerebral infarcts have a high iron content in the acute as well as in the residual stages. In lobar hematomas the iron increase moves from the core of the bleeding in the acute phase to the boundaries afterwards. Iron accumulation in the subpial space allows the demonstration of superficial cortical siderosis. Lacunar infarcts and ischemic white matter changes do not contain increased iron content. Cortical micro-bleeds can be seen as small iron deposits in contrast to cortical micro-infarcts, where they are absent.
Discussion: In cerebrovascular diseases the Fe accumulation is a secondary phenomenon, linked to the development of infarcts and/or hemorrhages and due to the disturbances of the blood-brain barrier.
Keywords: Post-mortem magnetic resonance imaging, particle induced X-ray emission, brain iron accumulation, cerebral infarct, lobar hematoma, cortical superficial siderosis, lacunar infarct, ischemic white matter changes, cortical micro-infarct, cortical micro-bleed.

Introduction
In the central nervous system, iron (Fe) linked to proteins, is involved in many important processes such as oxygen transportation, oxidative phosphorylation, and synthesis and metabolism of neurotransmitters [1]. Astrocytes are largely responsible for distributing Fe in the normal brain. As capillary endothelial cells are separated from the neuropil by the end-feetâ€™s of astrocytes, they are ideally positioned to transport Fe to other brain cells [2]. The highest concentrations of Fe in the normal cerebral hemispheres are found in the globus pallidus, followed by the putamen, the caudate nucleus and the thalamus on the transverse relaxation rates R2 and R2* magnetic resonance imaging (MRI) [3]. In the substantia nigra the main high Fe compound in dopamine and norepinephrine neurons is the neuromelanin-iron complex that serves to trap Fe and to provide neuronal protection for oxidative stress [4]. The Fe concentration is lower in infant brains compared to adult ones [5]. It increases during the further aging process in the different human brain regions, but most strongly in the basal ganglia [6-7]. The Fe content decreases after the age of 80 years [8]. This is probably due to progressive age-related neurodegenerative changes [9].

Ferroptosis is a unique form of programmed cell death, characterized by cytosolic accumulation of iron, lipid hydroperoxides and their metabolites, and affected by the fatal peroxidation of polyunsaturated fatty acids in the plasma membrane [10]. There are many techniques to demonstrate Fe deposits in postmortem brains. The classical ones are the histological Turnbull or Perl stains or using ferritin histochemistry on paraffin embedded samples [11]. Particle induced X-ray emission (PIXE) analysis can be used to quantify not only Fe but also other trace elements in fresh samples of different brain regions [12].
Semi-quantitative assessment and distribution of Fe in the different brain regions and structures can also be made with 7.0-tesla magnetic resonance imaging (MRI), using the GRE T2* weighted sequence. It can, however, only be applied to determine the degree of mineralization in the basal ganglia and the brainstem nuclei [13]. Fe deposition cannot be quantified in the cerebral cortex with this method. Susceptibility-weighed MRI or quantitative susceptibility mapping have to be used for that purpose [14-15]. The present study reviews the published findings concerning the Fe content in cerebrovascular lesions, mainly demonstrated by MRI examination and PIXE analysis.

Methods
Post-mortem semi-quantitative assessment and distribution of Fe in the different brain regions and structures can best be made with 7.0-tesla MRI, using the GRE T2* weighted sequence. Although the technique is mainly used for the detection of micro-bleeds, it can, however, also be applied to determine the degree of mineralization in the basal ganglia and brainstem nuclei [16]. PIXE analysis can be used to quantify not only Fe but also other trace elements in fresh samples of different brain regions. The accuracy of the method has been previously shown by comparison of animal brain matter examined with PIXE analysis and with instrumental neutron activation analysis [17]. For the dissection of the brain special adequate surgical instruments and tools as well as an adequate sampling procedure are needed. The brain dissection has to be performed in a sterile room and in order to avoid the risk of metal contamination it is performed with molybdenum instruments [18].

Results
On PIXE analysis of brain samples of an acute ischemic stroke Fe is increased in the cortex and the white matter of acute non-hemorrhagic cerebral infarcts. It is not augmented in the basal ganglia, when these structures are involved in the infarct. The latter is due to the already high normal Fe content of these structures on PIXE analysis. MRI can also show the increased Fe content in infarcts of the cerebral cortex (Fig.1). The â€œpenumbraâ€ regions with partial ischemia do not show an increased Fe content in the cerebral cortex and white matter on PIXE analysis [19]. In old â€œso-calledâ€ white infarcts a further increase of Fe is observed [20]. 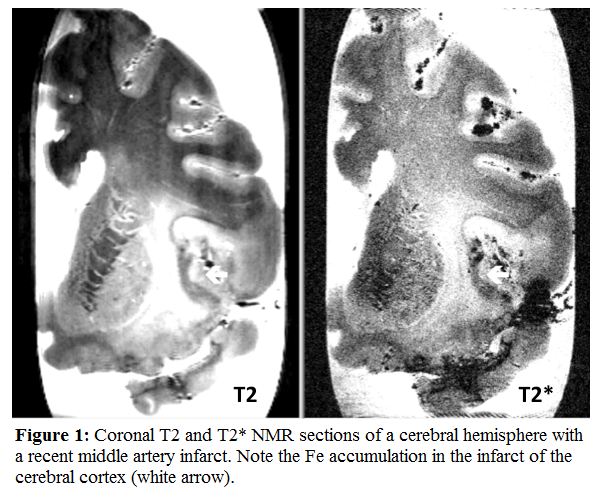 The Fe accumulation in hemorrhagic brain infarcts is much stronger than in the non-hemorrhagic ones and include also the infarction of the striatum [21]. Although lobar hematomas can have different causes, many of them can be related to CAA [22]. These hematomas have a homogenous GRE T2* signal on MRI in the acute stage with a progressive increase of the Fe content at the boundaries when the hematoma core is progressively collapsing (Fig.2) [23]. 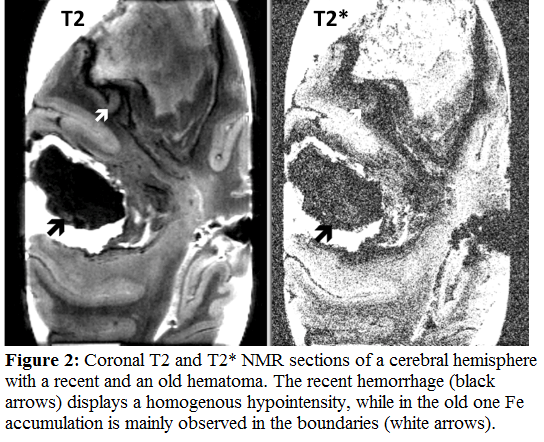 Cerebral superficial siderosis, due to Fe accumulation in the subpial space, is mainly detected with the T2* sequence of 7.0-tesla MRI (Fig.3). It is probably due to a previous hemorrhagic lesion, which could not be detected any more [24]. 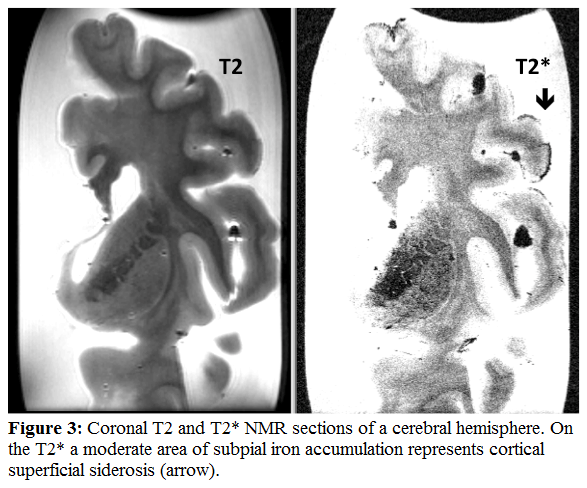 The most common forms of vascular dementia are due to subcortical vascular encephalopathy, strategic infarcts and multiinfarct encephalopathy [25]. The Fe content in the infarcts depends on their age as shown above in acute and residual strokes. In recent years cerebral small-vessel disease, characterized by arteriosclerosis, lacunar infarcts, cortical micro-infarcts and diffuse white matter changes, is considered to be the most important substrate for the vascular cognitive impairment [26]. Lacunar infarcts and diffuse loss of myelin and axons in the centrum semiovale are considered to be the main lesions of vascular dementia [27]. Fe deposition is overall not increased in lacunar infarcts and in ischemic white matter disease (Fig.4) [28]. 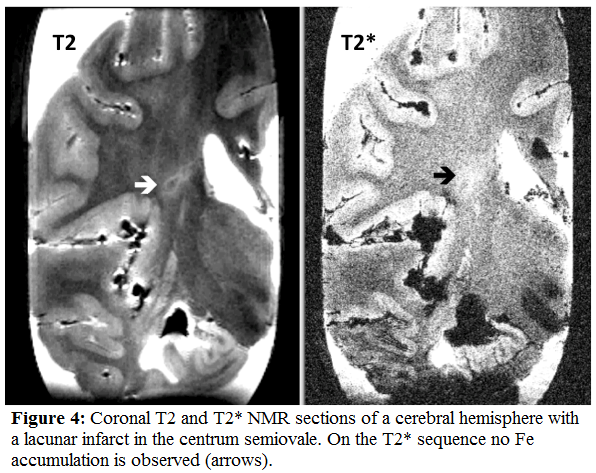 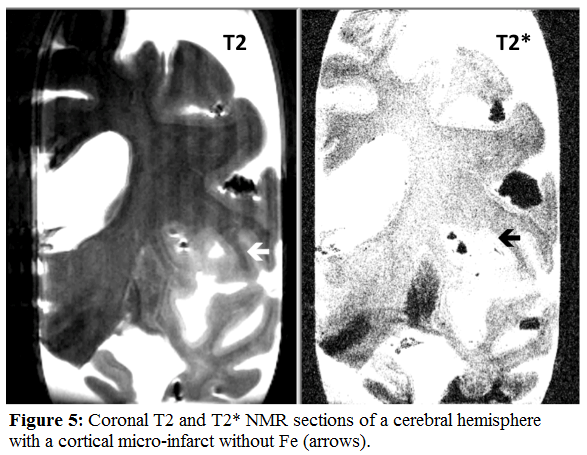 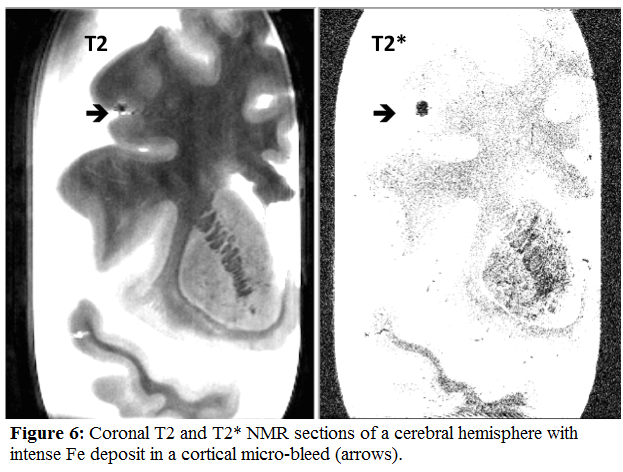 Discussion
The Fe accumulation in cerebrovascular diseases is clearly a secondary phenomenon, occurring after a single or after several strokes. In acute ischemic territorial strokes Fe is significantly increases in the infarct areas. On PIXE analysis the reduction factor, representing the wed/dry tissue ratio in the infarcted area is also high, indicating that the brain edema and the increased Fe content are both due to disturbances of the blood-brain barrier [19]. Also in old â€œso-calledâ€ white infarcts Fe accumulation even increases [20].
On the contrary lacunar infarcts and ischemic white matter disease do not display significant Fe accumulation. The incidence of hemorrhagic lacunar infarcts is low (4.5%) but their number can increase upto 17% in case of an associated old spontaneous intracerebral hemorrhage [30]. The Fe content in cortical micro-bleeds can easily be detected on the T2* MRI sequence, while absent in cortical microinfarcts [31].
In neurodegenerative diseases on the other hand there is evidence of a consistent correlation between the severity of the cognitive dysfunction and the degree of Fe deposition, mainly occurring in the hippocampus, cortical areas, and basal ganglia [32]. Although there is already Fe accumulation in â€œpureâ€ Alzheimerâ€™s disease brains, it further increases in those with concomitant cerebrovascular lesions due to cerebral amyloid angiopathy [33].