Abstract
Trapa japonica (water caltrop) is one of the main aquatic plant with various pharmacological functions; however, the effects associated with anti-obesity have not been fully identified. In the present study, we investigated the inhibition of adipocyte differentiation and adipogenesis by Hot-Water extracts of T. japonica (WETJ) in 3T3-L1 pre-adipocytes. Treatment with WETJ suppressed the terminal differentiation of 3T3-L1 pre-adipocytes in a dose-dependent manner, as confirmed by a decrease in the lipid droplet number and lipid content through Oil Red O staining. WETJ significantly reduced the accumulation of cellular triglyceride, which is associated with a significant inhibition of pro-adipogenic transcription factors, including PPAR?, C/EBPa and C/EBPÃŸ. In addition, WETJ potentially downregulated the expression of adipocyte-specific genes, including aP2 and leptin. Furthermore, WETJ treatment effectively increased the phosphorylation of the AMPK and ACC; however, treatment with a potent inhibitor of AMPK, compound C, significantly restored the WETJ-induced inhibition of pro-adipogenic transcription factors. These results together indicate that WETJ has preeminent effects on the inhibition of adipogenesis through the AMPK signaling pathway, and further studies will be needed to identify the active compounds in T. japonica.
Keywords: Trapa japonica, Adipogenesis, AMPK, 3T3-L1 pre-adipocytes.
Introduction
Obesity is a metabolic disorder caused by abnormal regulation of energy metabolism in the body when energy intake exceeds consumption for a prolonged period of time to convert the excess energy into fat that accumulates in the subcutaneous or abdominal regions. Of particular note is adipokine produced and secreted by the adipocytes, which is a known risk factor of neurodegenerative diseases such as diabetes, cardiovascular diseases, Parkinson's and Alzheimer's as well as of various cancer types including breast, endometrial, gastric, colorectal, and esophageal cancer [1-3].

According to a survey conducted by the World Health Organization (WHO), global obesity rate in 2014 was 39%, a two-fold increase since 1980. In line with this, obesity rate in Korea is reported to have steadily increased from average 29.2% in 2001 to 32.9% in 2014 due to westernization of dietary habits and changes in living conditions. Obesity is thus receiving growing attention as a grave health problem [4,5]. Treatment of obesity generally involves drug administration and surgery in addition to the improvement of lifestyle such as dietary control and exercise. However, the two most widely used drugs for obesity treatment; Sibutramine and Osristat cause not only the side effects of cardiovascular and gastrointestinal disorders but also the symptoms of headache, severe thirst, constipation, insomnia, and palpitation, so that the development of a therapeutic agent with proven safety and effectiveness is urgently needed [6,7]. Thus, rigorous efforts have been made in discovering and researching a material exhibiting anti-obesity efficacy among the natural substances with proven safety. In general, obesity is known to be caused by two critical factors including adipocyte hypertrophy due to triglyceride accumulation induced by adipogenesis and adipocyte hyperplasia upon the proliferation and differentiation of adipocytes [8]. Adipogenesis is a process of differentiation that creates adipocytes, which accompanies changes in cell morphology, gene expression and hormone sensitivity. Such process of adipogenesis is known to be sequentially influenced by the adipogenic transcription factors such as sterol response element binding protein 1c (SREBP1c), peroxisome proliferator-activated receptor ? (PPAR?) and cytidine-cytidine-adenosine-adenosine-thymidine (CCAAT) / enhancer binding proteins (C/EBPs) (9,10]. In addition, once adipocytes have been formed through adipogenesis, not only the morphological characteristics such as triglyceride accumulation seen in white adipocytes but also the expression of adipocyte-specific genes including adipocyte-specific lipid binding protein (aP2) and leptin is known to occur [11]. AMP-activated protein kinase (AMPK), in particular, is a key regulator of energy homeostasis known to control adipogenesis, which elicited numerous studies on obesity prevention and treatment with AMPK as a drug target [12].
This implicates that the regulation of adipogenesis could be applied as an important target of obesity inhibition as it is an essential method to control the mechanism leading to adipocyte production. Water caltrop (Trapa japonica) is an aquatic annual plant belonging to the Lythraceae family and a dicotyledon. It is known as a free-floating plant that inhabits the ponds, shallow marshes and swamps in tropical and subtropical regions in Asian countries. A whole variety of water caltrop plants exist including Trapa japonica, Trapa bicornis, Trapa natans, Trapa incisa, and naturally crossbred cultivars [13]. The fruit of water caltrop is composed of approximately 80% starch, 5% protein, and a trace amount of vitamins [14]. Its taste is similar to chestnuts and it is known to have been used as a plant resource in regions throughout Asia including Korea. The bark of water caltrop contains an abundance of dietary fibers and polyphenol [15] and it has long been used in Chinese medicine. Although functional substances with various pharmacological activities have so far been reported, studies on their inhibitory activity against obesity and the direct molecular biological mechanism behind are relatively very rare. The present study thus investigated the anti-obesity effects of Hot-Water Extracts of Trapa japonica (WETJ) and how WETJ influences adipogenesis, and reports significant findings.
Materials and Methods Materials
In this study, for the differentiation of 3T3-L1 preadipocytes, insulin, dexamethasone and IBMX were used, and Oil Red O was used to detect the triglyceride formation in adipocytes while compound C was used to inhibit the activity of AMPK; all these materials were purchased from Sigma-Aldrich (St. Louis (MO) USA). The different types of primary antibodies used in the protein analysis were purchased from Santa Cruz Biotechnology Inc. (Santa Cruz (CA) USA) and Cell Signaling Technology (Beverly (MA) USA) (Table 1), and the secondary antibodies used in the immunoblotting: peroxidase-labeled donkey antirabbit and peroxidase-labeled sheep anti-mouse immunoglobulin, were purchased from Amersham Life Science Corp. (Arlington Heights (IL) USA) 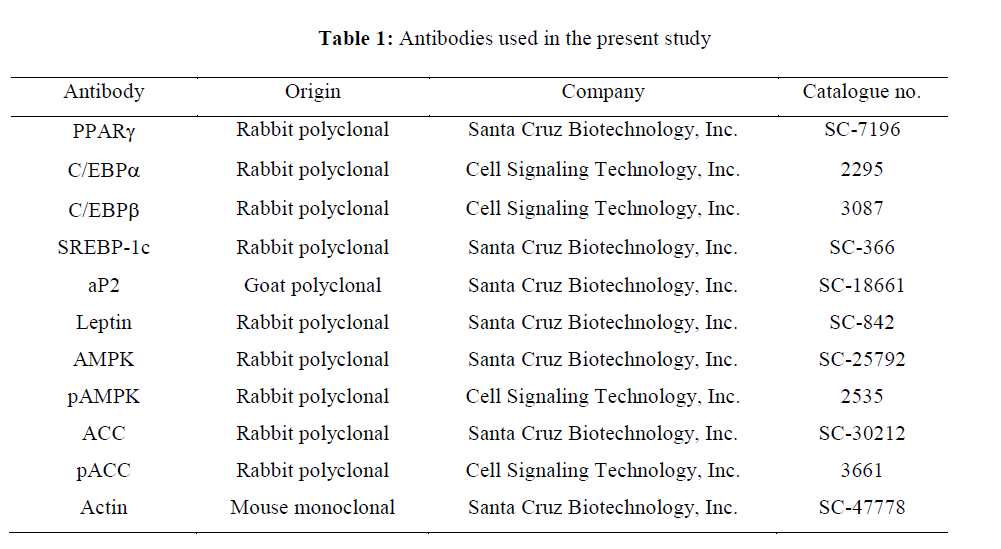 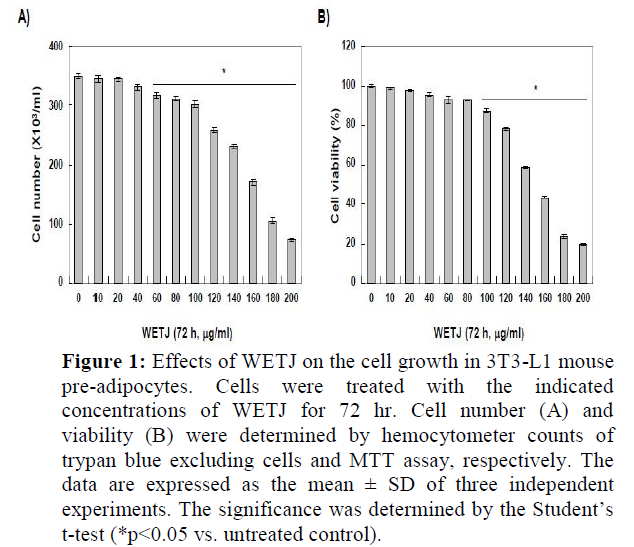 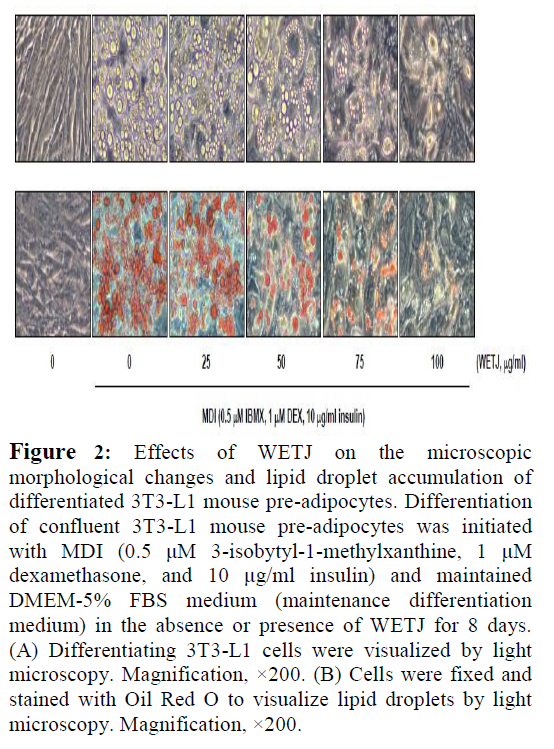 Effects of WETJ on the production of triglycerides
Triglycerides are in the form of one glycerol molecule connected to three fatty acid molecules via an ester bond. They account for over 95% of fat ingested as food, and along with glucose, they are used as an important energy source by the cells [19]. However, an excess amount of triglycerides are absorbed and stored by adipocytes where they take a part in inducing obesity and thereby cause various diseases [20]. The triglyceride storage by adipocytes is known to be mediated by triglyceride-rich lipoproteins including chylomicron and very low density lipoprotein (VLDL) [21]. Thus, to examine the effects of WETJ on the production of triglycerides, the Oil Red O-stained lipid droplets were extracted using isopropanol and triglyceride content was measured. The result is presented in Figure-3. 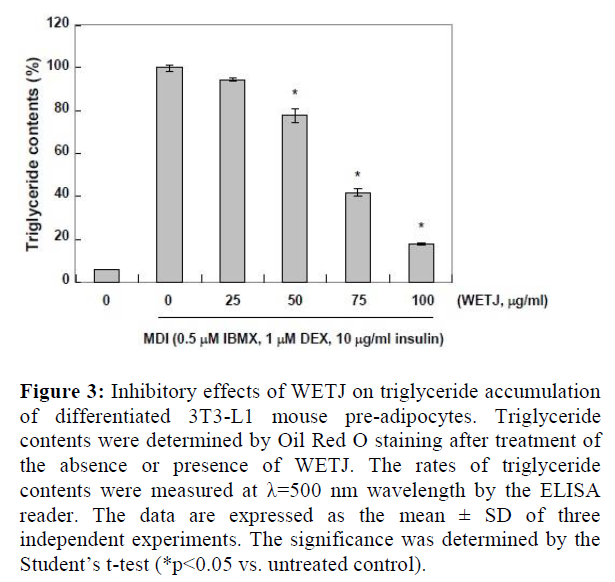 As shown, along the process of MDI-induced differentiation into adipocytes, triglyceride production markedly increased; however, WETJ treatment led to a gradual decrease in triglyceride production, until the group treated with a maximum concentration 100 Âµg/ml of WETJ displayed approximately 80% inhibition of triglyceride production. The result is indicative of the inhibitory effects of WETJ on the production of triglycerides, and such effects are thought to be correlated with the inhibition of lipid droplet formation.
Effects of WETJ on the expression of adipogenic transcription factors and adipocyte-specific genes
Myriads of adipogenic transcription factors are known to engage in each step of adipogenesis. First, the expression of C/EBPÃŸ in early stage of differentiation promotes the expression of other adipogenic transcription factors C/EBPa and PPAR? so as to play a part in enhancing the characteristics of mature adipocytes such as insulin-sensitive glucose uptake. For SREBP1c whose expression is induced by insulin, a direct participation in PPAR? expression has been reported [22,23]. The C/EBPa and PPAR? activated by the adipogenic transcription factors in early stage of differentiation are known as the key regulators of adipogenesis. The interaction between the two genes with a consequent synergistic effect completes the morphological characterization such as lipid droplet production and cell size increase and enhances the characteristics of adipocytes, through the expression of adipocyte-specific genes including aP2 and leptin [24, 25]. 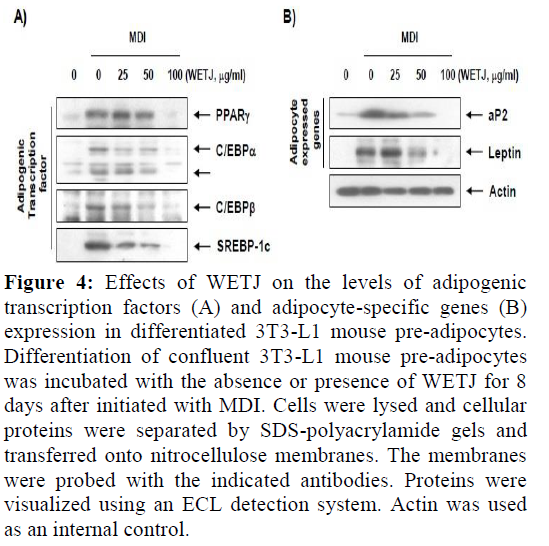 Effects of WETJ on the inhibition of adipogenesis through the AMPK signaling pathway
AMPK, as a key regulator and energy sensor in the energy homeostasis, is known to be activated by phosphorylation caused by an increase in AMP/ATP ratio due increased level of intracellular AMP upon increased energy consumption, and by the activation of CaMKKÃŸ caused by a change in intracellular Ca2+ level and LKB1, a serine/threonine protein kinase and a known tumor suppressor [26,27]. The activated AMPK increases the level of GLUT4 in muscle cells to act on increasing the glucose transport while also increasing the lipid production in the body based on the inhibition of fatty acid synthase (FAS) and acetyl CoA carboxylase (ACC) in synthesizing fatty acids and of HMG-CoA reductase in limiting the cholesterol biosynthesis. In this way, AMPK is known to promote adipogenesis [28-30]. This study thus determined whether the AMPK signaling pathway was involved in WETJ-induced adipogenesis inhibition. First, the expression of ACC acting on AMPK and the step downstream was examined for changes, and as shown in Figure-5A, the phosphorylation of AMPK and ACC substantially increased. Based on the result, a role of AMPK activation in WETJ-induced adipogenesis inhibition was predicted. Next, suppressing the AMPK pathway through the pretreatment with compound C, an AMPK inhibitor, led to the inhibition of WETJ-induced phosphorylation of AMPK and ACC as shown in Figure-5B, while the expression of adipogenic transcription factors PPAR?, C/EBPa, C/EBPÃŸ and SREBP1c were shown to have increased. What the results so far have indicated was a crucial role played by the AMPK activation and the subsequent reduced expression of adipogenic transcription factors in WETJ-induced adipogenesis inhibition. The findings of this study are anticipated to prove highly useful as valuable data for continuing research as they suggest a potential use of Hot- Water Extracts of Trapa japonica as an anti-obesity agent or drug. Nevertheless, an additional biochemical interpretation of the anti-obesity mechanism associated with energy metabolism and signaling system and an analysis of the active compounds contained in WETJ, seem essential in future studies. 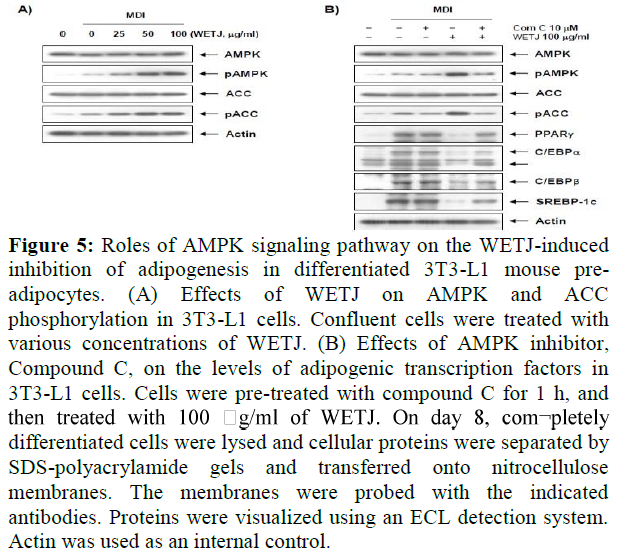