Abstract
Introduction: Nutrition information on food labels is an important source of information which may influence consumers? purchasing behavior and health. Therefore, it is of eminent importance that manufacturers provide reliable nutrition information on food labels. Unfortunately, food labelling regulations and policy measures for the control on the reliability of nutrition labels are often lacking or underutilized; especially in developing countries such as Suriname.

Objective: The objective of the study was to measure the reliability of the declared sugar content on the nutrition labels of the most consumed sugar-sweetened beverages in Suriname.

Design & Methods: In accordance with the results of a consumer survey (N=155), the reliability of the declared sugar content on nutrition labels, of the 6 most consumed sodas and 6 most consumed prepackaged fruit juices, were determined via Brix analyses (N=72). To determine whether there was a significant difference, the average measured value was compared with the declared sugar content on the nutrition label via a two-sided test (a = 5%) in SPSS.

Conclusion: An investigation of nutrition labelling on SSBs in Paramaribo, showed that declared sugar contents on nutrition labels may not always be accurate. In this study, the majority of declared sugar values in sodas where luckily lower than the average measured values. However, we must be mindful of chances of instrumentational and observational errors. Nonetheless, 2 fruit juices had significantly higher sugar contents than declared on their nutrition label. This can be harmful for consumers with medical conditions such as diabetes, and may hamper consumers? right to reliable and safe nutrition information. Therefore, it is advisable that manufacturers ensure the declaration of trustworthy nutritional values; especially when it concerns products with high implications for adverse health effects. Hence, a policy plan for the development, control and monitoring of nutrition information in Suriname is of paramount importance. 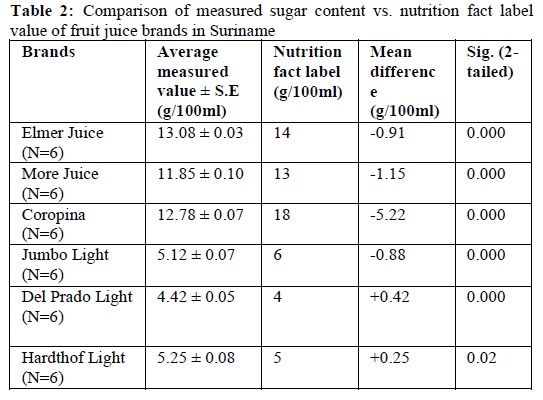 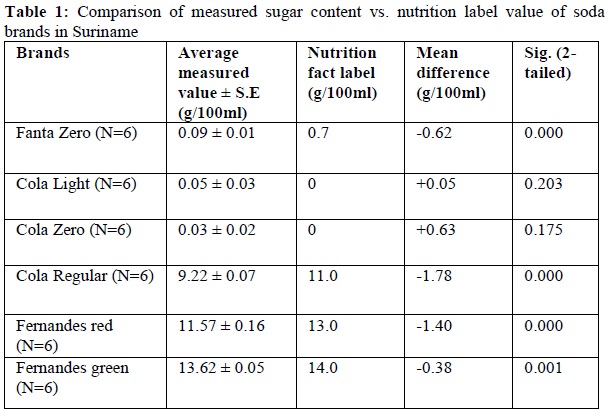 Regardless of the brand and the test value (= nutrition fact label value per brand), the sigma 2-tailed value for each brand was less than alpha (p < 0.05). From this we can conclude that the average measured value of all the juice samples examined differed from the value indicated on the nutrition label.

Discussion and Conclusion
Nutrition label versus average measured values Sodas
From table-1, we can conclude that there was a significant difference between the average measured values and the nutrition label information between 4 out of 6 soft drink brands (67%) under investigation (p < 0.05). The sugar content of both Fanta Zero, Fernandes red, Fernandes green and Coca-Cola Regular turned out to be significantly lower than the value indicated on the nutrition label. It is noteworthy that Coca-Cola Light and Zero indicate the sugar content on their nutrition label information as zero because, according to the rounding rules, it is allowed to express the sugar content as zero if a food contains less than 0.5 grams of sugar per 100 ml. As long as a producer does not have extreme lower values stated on his label than actually present in the food, the situation is not alarming or unsafe for consumers? consumption. Nevertheless, it is advisable to state the nutritional value declaration as concretely and precisely as possible.
Fruit juices
From table-2, we can conclude that the average measured sugar contents of Elmer, More, Coropina and Jumbo Light were lower than the nutritional declaration.
However, the average measured sugar levels of the 2 Light juices examined were significantly higher than the nutrition label information. The 2 Light juices in question, Del Prado Light and Hardthof Light, may meet the conditions for juices with a â€œLight claimâ€ according to the Codex Alimentarius guidelines, but the detailed nutritional labelling leaves room for improvement. This can be harmful for consumers with medical conditions such as diabetes, and may hamper consumers? right to reliable and safe nutrition information. Therefore, it is advisable that manufacturers ensure the declaration of trustworthy nutritional values; especially when it concerns products with high implications for adverse health effects.
Conflict of interest
The authors declare that there are no conflicts of interest.