Research in Context
What is already known about this subject?
-Statin use is highly prevalent for the prevention of cardiovascular disease

What is the key question?
-Is statin use associated with a higher risk of developing Type 2 diabetes among veterans?

How might this impact on clinical practice in the foreseeable future?
-Clinicians might select the dose/potency of statin based on the individual risk for developing Type 2 diabetes

Research Design and Methods
Study population
The study population was derived from the Veterans Affairs (VA) National Database from January 1, 2000 through December 31, 2012. Eligible Veterans met the following criteria: a) at least 30 years of age at the time of first statin prescription (referred to as index date) for statin users and diagnosis of dyslipidemia (total cholesterol of 200+ mg/dl or LDL-cholesterol of 130+ mg/dl) for non-users of statin as documented in their electronic health records (electronic heath record);         b) free of Type 2 diabetes at the index date; c) no usage of insulin or oral hypoglycemic agents; d) at least two VA visits between 2000 and 2012; or e) diagnosis of cardiovascular disease among non-users of statin.
For analyses of changes in plasma glucose concentrations following statin initiation, we also required statin users to have =1 random glucose and =1 triglyceride measurements in the year preceding statin initiation and = 2 random glucose measurements within 12 months after statin initiation. For subjects with multiple glucose measurements in a day, we randomly selected one glucose measurement per 24 hours. Lastly, we required statin users to have their first VA visit at least one year prior to first statin prescription. We excluded subjects that were being treated with ezetimibe and subjects with first statin prescription less than one year after their first VA visit. After these exclusion criteria, we had a final sample of 3,390,799 subjects of whom 1,832,722 were statin users.

Assessment of index date for statin users
Statin use was obtained using the VA prescription database. The index date was defined as the date of first statin prescription. Since statin brands vary by potency and dosage, we classified statin as low, medium, and high potency (supplemental Table 1 provides details).

Assessment of Type 2 diabetes
Type 2 diabetes was defined as the presence of one inpatient ICD-9 code 250.xx or the presence of at least two outpatient ICD-9 codes 250.xx for outpatients in the database or the initiation of either an oral or injectable diabetes mediation based on VA electronic prescription information and VA pharmacy fill information.

Statistical Analysis
Exploratory assessment of baseline glucose, triglycerides, cholesterol, body mass index, and other covariates was performed using means (standard deviation) for normally distributed variables and ranges, medians, and inter-quartile range for non-Gaussian distributed variables. Graphical methods (e.g. histograms and boxplots) were used to visualize distribution of the data.  We evaluated the association of statin use with plasma glucose by plotting daily mean glucose (95% confidence intervals) during a period of 60 and 365 days pre- and post-initiation of statin therapy. In secondary analyses, we conducted stratified analyses by sex, triglycerides values (< and = 150 mg/dl), and statin potency (low, medium, and high). To address confounding by indication, we used multi-level propensity score (derived via logistic regression models that included predictors) to determine the probability of receiving no statin or low, medium, or high-potency statin. We then use these probabilities to weight study subjects using inverse probability of treatment weighting in the Cox regression model. We calculated person-time of follow up as time from index date to the first occurrence of a) Type 2 diabetes, b) death, c) prescription of ezetimibe during follow up, or d) end of follow-up period (December 31, 2012). To minimize immortal time bias, we consider the time between date of dyslipidemia and first prescription of statin as unexposed time for statin users. We calculated the incidence rate of Type 2 diabetes within each exposure group by dividing the number of new Type 2 diabetes events by the respective person-time of follow up. All analyses were performed using SAS Enterprise Guide (version 7.1). Alpha level was 0.05 and all tests were two-sided.

In contrast, our secondary analysis did not show any meaningful elevation in random plasma glucose after statin initiation in this cohort of Veterans. Our results are consistent with data from the JUPITER trial [19], where an intervention with 20 mg/d of rosuvastatin did not increase fasting glucose at 24 months of follow up (median glucose 98 mg/dl) compared to placebo (median glucose 98 mg/dl) in 17,802 healthy adults4. Furthermore, in a trial of 146 dyslipidemic patients, a 12-month intervention with 1 mg/d of pitavastatin resulted in a 3 mg/dl reduction in fasting plasma glucose compared to placebo[24]. In contrast, other studies reported elevated glucose concentration after statin initiation. In a randomized trial of 146 hypercholesterolemia subjects, 5 mg/d of atorvastatin resulted in a 3 mg/dl increase in fasting serum glucose compared to placebo after 12 months (p<0.01) [24]. In addition, atorvastatin intervention increased serum insulin and homeostatic model of insulin resistance compared to placebo[24]. In another trial of 29 people with Type 2 diabetes and dyslipidemia, an intervention with simvastatin (10 mg/d) led to 18% increase in fasting glucose compared with baseline value after 4 months of intervention [25]. The apparent discrepancy between these trials and our observational findings merits some comments. First, we did not have fasting glucose in our study for appropriate comparison with trial data mentioned above. Second, heterogeneity in study populations and Type 2 diabetes phenotype [23], could partly explained the discrepancy (VA population was mostly male and free of Type 2 diabetes while JUPITER [25], recruited subjects with elevated C-reactive protein and other trials recruited Type 2 diabetes subjects [3] or older adults with dyslipidemia (mean age 65 years) [24] vs. 60 years in our study.
What potential mechanisms might support causal effect of statin on Type 2 diabetes incidence?
-Several potential biologic mechanisms have been proposed including inhibition of glucose uptake [26].
Studies have demonstrated that simvastatin can rapidly and reversibly block insulin secretion in single-islet cultures [27] and cell cultures [28]. In another experiment using L6 myotubules, both atorvastatin and simvastatin inhibited insulin-mediated glucose uptake by blocking insulin receptor substrate-1 (IRS-1) phosphorylation [18]. Statin may also inhibit glucose uptake via increase in cellular non-esterified fatty acid concentration; statin treatment has been shown to induce expression of fatty acid synthase and acetyl coA carboxylase 1 [29] and increase in free fatty acids [30].  Treatment of cultured rat cardiomyocytes with atorvastatin led to reduction in glucose uptake and reduction in mRNA and protein expression of glucose transporter type 4 [31,32] and IRS-1 [32]. Another hypothesis is that statin might heighten the risk of Type 2 diabetes by increasing insulin resistance [33,34].
The current study has some limitations including the use of electronic health records to ascertain exposure and outcome. Due to a lack of information on hemoglobin A1C and fasting glucose, we were not able to use the American Diabetes Association definition for incident Type 2 diabetes. The observational design of our study does not preclude unmeasured confounding as alternative explanation of observed results. Although 94% of Veterans were male, we had data on nearly 223,000 women to show a similar relation.
Despite above limitations, our study has numerous strengths including a large sample size; availability of data on various statin brands and several racial groups across the entire US; and the robustness of findings in secondary analyses. Given the efficacy of statin in the prevention of cardiovascular disease, the reported modest elevation of Type 2 diabetes risk with statin use does not affect the utility of statins in preventive cardiology. Our findings suggest that in the presence of strong family history of Type 2 diabetes or other risk factors for Type 2 diabetes such as obesity, clinicians might consider low-potency statin supplemented by other drugs (non-statin) or modifiable lifestyle factors for management of dyslipidemia. The availability of PCSK9 drugs may also be considered when subjects being evaluated for statin treatment are at higher risk of developing Type 2 diabetes.
In conclusion, our findings show a positive association between statin use and incidence of Type 2 diabetes among US Veterans.

Acknowledgements:
We also thank Mrs. Constance Nelson, MPH for her help with logistics and administrative support. Dr. Djousse has full access to data used for this manuscript.

Data availability:  Drs. Djousse, Gagnon, and Cho have full access to the data sets. As per the Department of Veterans Affairsâ€™ policy, veterans data are not available to the public.

Source of funding: This study was supported by investigator-initiated grant from Merck (to LD). The study sponsor was not involved in the design of the study; the collection, analysis, and interpretation of data; writing the report; or the decision to submit the report for publication. No other disclosures from the authors.
Funding source: Supported by an investigator-initiated grant from Merck (Protocol # 2922).
Contribution statement:
- Substantial contributions to conception and design, acquisition of data or analysis and interpretation of data: Djousse, Song, Cho, Gaziano, and Gagnon.
- Drafting the article or revising it critically for important intellectual content: Djousse, Song, Cho, Gaziano, and Gagnon.
- Final approval of the version to be published: Djousse, Song, Cho, Gaziano, and Gagnon.

Conflicts of Interest: None. 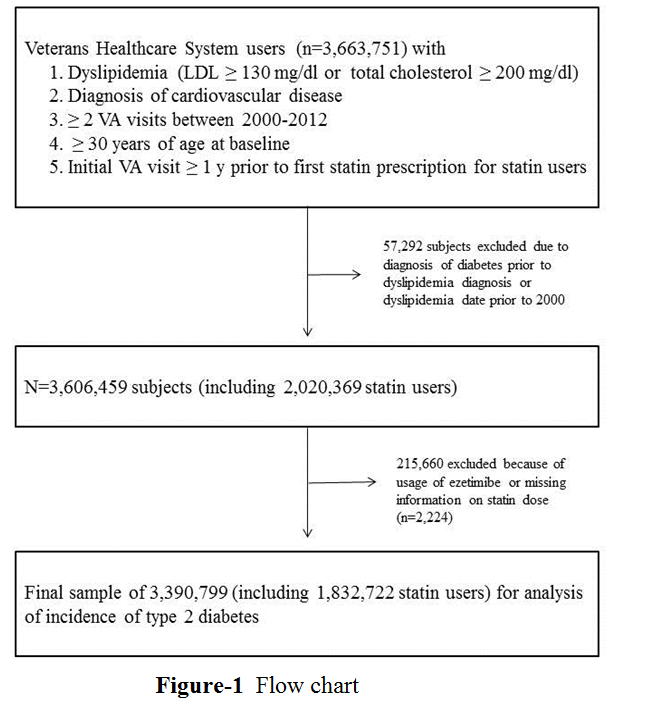 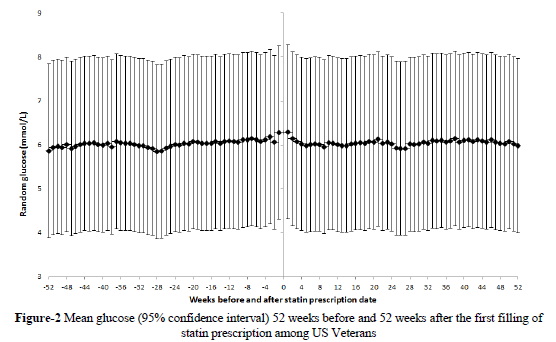 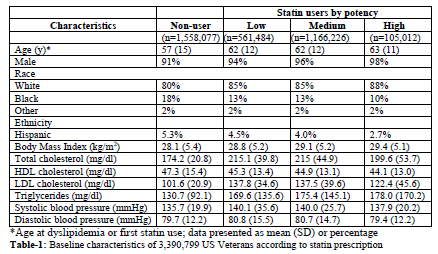