Conclusion: Promotion of egg and ESP consumption with poultry intervention significantly improved the nutritional status of young children, demonstrating the potential of an integrated approach to contribute to the countryâ€™s target to reduce malnutrition.

Introduction
From 2000 to 2016, Ethiopia recorded a consistent declining trend of stunting and underweight from 58% to 38% and 41% to 24%, the decrease of 1.25 % and 1.063 % per year, respectively. Yet stunting and underweight remain significant public health challenges of Ethiopia [1]. Wasting showed little decrease in the past sixteen years. To the contrary, anaemia has been reported to have increased from 44% in 2011 to 57% in 2016, presenting a further challenge to combatting malnutrition [1]. Poor feeding practices are one of the major factors contributing to under nutrition in Ethiopia.
Targets were registered using family folders in health posts followed by house to house check-ups for any missed child and double checking of ages with each caregiver.

Data Collection Procedures and Instruments
Dietary, morbidity, and poultry production assessments were carried out at baseline and endline by trained data collectors blind of group assignment and monthly by a nutritionist and animal health experts. Morbidities were assessed focusing on highly prevalent diseases in the study area including diarrhea, respiratory and malaria as well as egg allergy symptoms.
Anthropometry measurements of weight, length and MUAC were taken at baseline, monthly (weight and MUAC only) and endline. A digital scale of Seca Model 874 (Seca GmbH & Co KG) with the mother-child tare feature used for measuring weight. Two measures of weight were taken and when differed by 0.03 kg or more, a third measurement was taken and averaged with the closest measure. Subjects were measured twice for length using Shorr measuring board to the nearest 0.1cm. When measures were differed by more than 0.3 cm or more, a third measure was taken and averaged with the closest one. The left arm of the young children was used to measure MUAC using arm circumference insertion tapes, to the nearest 0.1 cm. The measurement was obtained with the caregiver seated and holding the young child on her lap. Hemoglobin tests were carried out using HemoCue Hb 301 (HemoCue AB, Ã„ngelholm, Sweden). Standard operating procedures and instructions were strictly followed during blood collection and the testing. Values were adjusted for altitude [11].
The intervention has been described previously [9]. In brief, it had two major components: capacity building and chicken gifting, and both were community-based, involving experts at district and community level, particularly health and agriculture extension workers and health development team leaders, as well as caregivers. With a goal of increasing egg intake, infants and young children were gifted two local chickens vaccinated for Newcastle disease in an innovative community approach named â€˜Chicken Gift Ceremonyâ€™ where caregivers promised in front of religious and community leaders to add at least two more, replace if die and not to sell nor share the eggs or chickens [9].
Moreover, each caregiver received counseling monthly at health post using BCC materials developed for this study (colored laminated cards) promoting one egg and one measure (defined as half a cork top) eggshell powder (ESP) a day and environmentally safe poultry production. Nutrition messages focused on egg and ESP preparation and feeding while poultry messages emphasized four egg-laying hens per child, preparation of chicken shelter, environmental sanitation, and New Castle vaccination.
Hard-boiled and smashed egg was promoted in this study considering its easy preparation that requires only water and pot to boil and fork or spoon to smash. Breast milk was used to soften the smashed egg. The eggshells were collected, boiled, and sun dried so that they could be finely powdered using wooden pestle and mortar or local mill made of stone. ESP intake was promoted for children above one year as their calcium requirement increases at that age.

Data Analysis
WHO Anthro v3.2.2 was used for calculation of anthropometric indices of z-scores of length for age (LAZ, also called HAZ when a child was measured in standing position), WAZ and weight for height (WHZ). Stunting, underweight, and wasting were defined as LAZ, WAZ, and WHZ less than -2 standard deviations (SD) below median values respectively. Paired t-test was used to evaluate differences on outcomes before and after intervention. Independent two-sample t-tests were run to assess statistical differences on outcomes between intervention and control groups at baseline and end line. Trend of underweight and stunting rates was analyzed over the intervention period using visual inspection. Regression models adjusted for corresponding baseline values, age, sex of the child and other covariates were run to assess association and estimate effect size for continuous variables. Prevalence risk ratios (RR) were used as risk estimate to evaluate the effect of egg and ESP intake on underweight, stunting, and anemia. P-value < 0.05 was considered significant. SPSS software (IBM SPSS Statistics, Version 20) was used for analysis.

Results
Out of 287 mother-child pairs who passed eligibility, 15 did not meet inclusion criteria. A total of 272 infants and young children were randomly allocated to the intervention (n=140) and control (n=132). Due to a death by fire accident and three relocations, four children were lost to follow-up only from the control arm (Figure 1). However, 18 children from the intervention were found to be sensitive to egg and excluded from analysis. As a result, the analysis was conducted for 250 mother-child pairs (122 in the intervention and 128 in the control group).
Baseline characteristics were comparable between the groups as shown in Table 1.Almost all caregivers were in both groups (99.2%) were biological mothers. More than 95% of them were farmers. Illiteracy accounted for 75%. About half of them had ever received education on feeding young children with eggs but no one was educated about ESP. Intervention group was comprised of a significantly higher number of younger children with 6-8 months of age compared to the control. About three-fourths of the households had two or three under five children. More than 63% of the child had a history of egg intake, but none had ever taken ESP. In both groups, cereals mainly maize, sorghum, and millet are predominantly produced followed by pulses (mainly haricot bean). Kale was the major vegetable produced in both groups. Livestock is common and 44% of the households had poultry.
Baseline child feeding practices of the two groups were similar as well. Almost all the children in both kebeles (99.2%) were found to be on breast feeding. At the start of the study, 80.3% and 87.5% of the children were introduced to complementary foods at around six months, 6.6% and 3.1% were lately introduced, and 13.1% and 9.4% did not start foods at all other than breast milk in the intervention and control groups respectively. With no significant difference in food types consumed by the children among the groups, cereals of maize, sorghum, and millet were the most common
food items (86% - 91%) consumed every day mainly in the form of porridge and bread (â€˜kitaâ€™). Next were eggs followed by pulses and cow milk as well as fruits and vegetables that were consumed by about 45% - 51%, 35% - 40% and 20% - 25%  of the children, respectively, at least once in a month. None of them ever ate meat, fish, and chicken and about 37% had never been fed with egg.

Conclusion
This community trial demonstrated that increased egg and ESP intake significantly reduced underweight and anemia among infants of rural Halaba population. Our study is in agreement with the view that eggs have important nutritional benefit for the at-risk pediatric population in low-income countries where ASFs are not readily available. Our study showed that children benefited through the reduction in underweight, stunting, and anemia in a homestead poultry operation that stressed child ownership. The results of this trial can be used to strengthen ongoing efforts of poultry interventions focusing on child nutrition in Ethiopia and other countries where ASF intake is low and the burden of undernutrition is high.

Acknowledgments
Primary funding for this study was provided by One Health, University of Saskatchewan. A grant from the Saskatchewan Egg Producers was used to offset cost of the chickens. 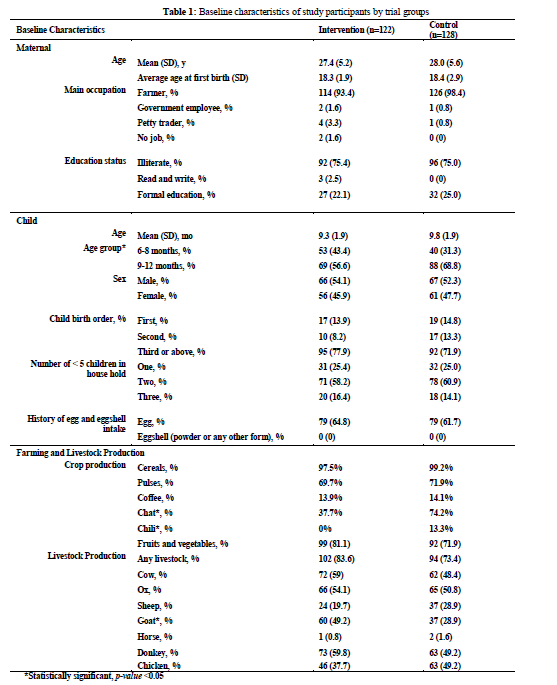 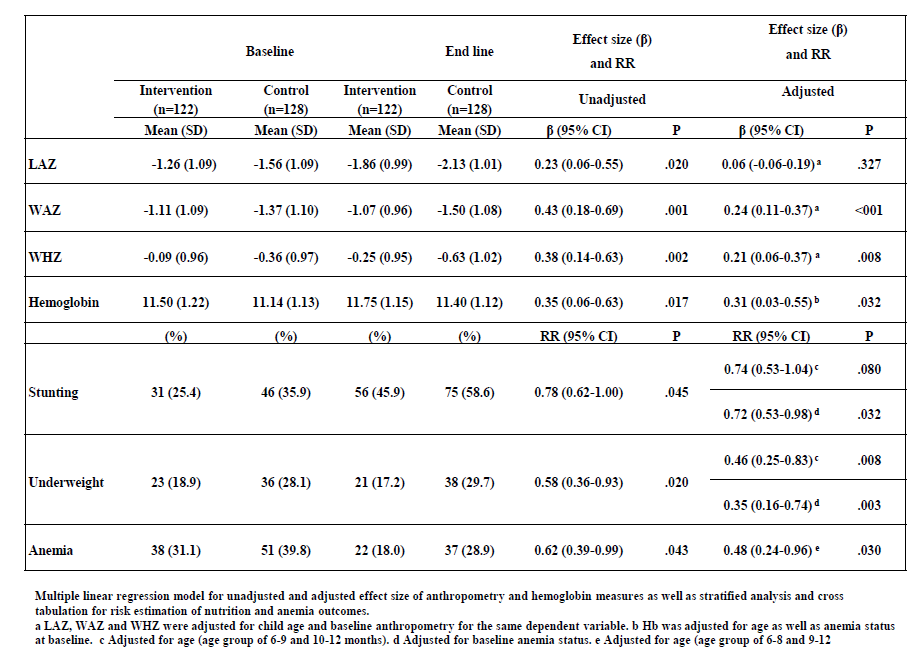