Abstract
Historically, transfemoral approach (TFA) was the main access site for percutaneous coronary procedure. Over the past decade, transradial approach (TRA) has been gaining popularity over (TFA). With frequent use of TRA, we have recognized the advantage of TRA over TFA. Multiple trials have been conducted to investigate TRAsâ€™ benefits and risk. We have performed a literature search on TRA vs TFA, on the advantages and disadvantages of both approaches. A total of 140 citations were identified but only 38 filled our eligibility criteria.
In this review, we found that TRA is associated with reduction of access site complication, time to ambulation and cardiac related death. However, lack of training and hesitancy of older interventionalist to switch approach is an impediment to the increased use of TRA. While the transfemoral approach has a higher access site complication rate, it is still integral as an access option.

Introduction
Percutaneous coronary intervention has revolutionized the field of cardiology and has become the cornerstone of  management of ischaemic heart disease (1, 2). Historically, coronary angiography and intervention has been commonly performed via the common femoral artery (3). However, this procedure is associated with bleeding complications, exacerbated by advances in aggressive periprocedural pharmacotherapy (4). New technological advancements such as reduction in size of interventional devices and the introduction of vascular closure devices have reduced the incidence of major bleeding, but major complications still occur (5-8).
Campeau was the first to introduce coronary angiography via the transradial approach (through the forearm) in 1989 (9). Several early studies reported a significant reduction in vascular complication with transradial approach compared with the transfemoral approach (10-13). These studies raised interest in the transradial access site as a viable and attractive alternative to femoral access (14, 15).

Conclusion
The transradial approach for PCI reduces access site complications, time to ambulation and reduces cardiac related death and morbidity in acute coronary syndrome populations. Whether this approach is applicable across all interventions including elective cases remains uncertain. The major impediment of such approach is the lack of training and hesitancy of older interventionalists to switch approaches. While the transfemoral approach has a higher access site complication rate, it is still integral as an access option. The possibility that radial approach (compared to femoral) may have a higher long-term rate of periprocedural stroke requires vigilant surveillance. 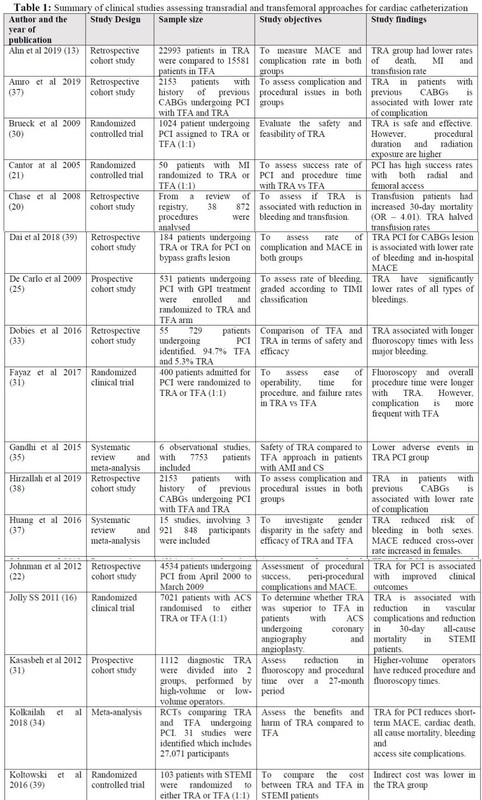 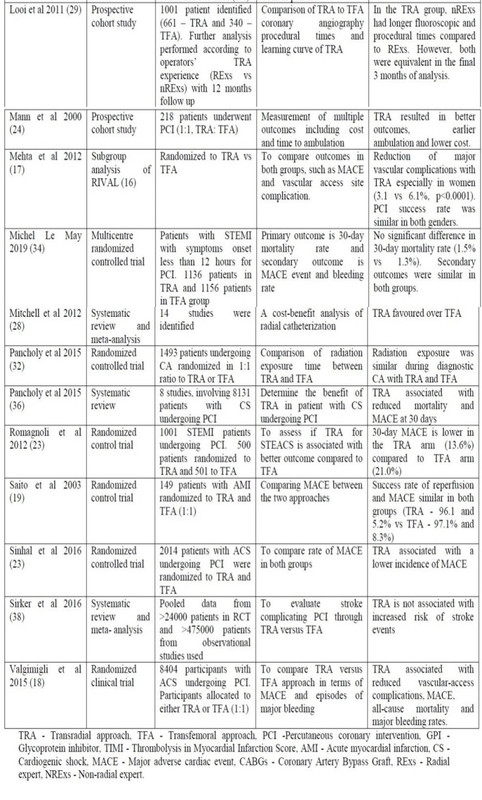