Reverse transcription-polymerase chain reaction (RT PCR)
Total RNA was isolated using TRIzol reagent (Invitrogen, CA). Total RNA (1 Âµg) obtained from cells was primed with random hexamers to synthesize complementary DNA using M-MLV reverse transcriptase (Promega, Madison, WI) according to the manufacturerâ€™s instructions. Polymerase chain reaction (PCR) was performed for amplification of the MuRF1 and atrogin1/MAFbx genes from the cDNA and glyceraldehyde-3-phosphate dehydrogenase (GAPDH) was used as an internal control. Oligonucleotide primers for MuRF1, atrogin1/MAFbx and GAPDH are shown in Table 3. RT-PCR reactions were incubated for an initial denaturation at 95? for 10 min, followed by 40 cycles of: 95? for 15 sec, 55? for 15 sec, and 72? for 15 sec. Amplification products obtained by PCR were electrophoretically separated on 1% agarose gel and visualized by EtBr staining. 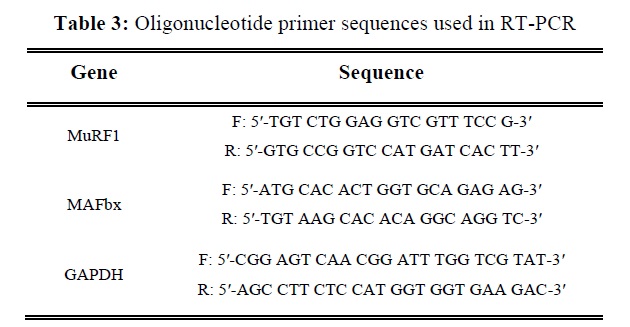 Statistical analysis
The data are expressed as the mean Â± SD. A statistical comparison was performed using one-way analysis of variance followed by Fisherâ€™s exact test. The significant differences between the groups were determined using unpaired Studentâ€™s t-test. p < 0.05 was considered to indicate a statistically significant difference.
Results
Confirmation of C2C12 myotube differentiation
C2C12 skeletal muscle myoblasts were induced to differentiate in a mitogen poor media such as 2% FBS, fusing to form multinucleate myotubes [21]. Fig. 1 illustrates that the cell diameter remained similar following 2, 4, 5 and 6 days of differentiation. In addition, the level of myogenin expression, a factor that regulates terminal differentiation of muscle cells, was similar following 2, 4 and 5 days then increased following 6 days. These results indicate complete differentiation of myoblasts into myotubes at this time (6 days). 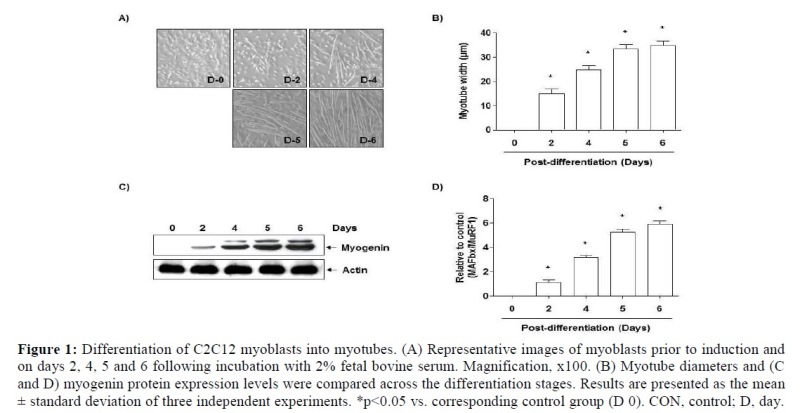 DEX induced muscle atrophy in C2C12 myotubes
MuRF1 and atrogin1/MAFbx protein expression levels were measured in C2C12 myotubes treated with DEX (10, 50 or 100 ÂµM) for 24 h (Fig. 2A and B). Treatment with DEX led to increased protein expression levels for MuRF1 and atrogin1/MAFbx, and the levels of expression increased in a dose dependent manner. These data suggest that DEX may induce muscle atrophy in C2C12 myotubes. In addition, as shown in Fig. 2C, when compared with the control group, the C2C12 myotube was markedly atrophied in the 100 ÂµM DEX treated group. Therefore, all further experiments were performed following treatment with 100 ÂµM DEX.
Toxicity of FTJ in C2C12 myoblast
The MTT assay was used to determine FTJ cytotoxicity to C2C12 myoblasts, which demonstrated no cytotoxic effects following FTJ treatment for 24 h (Fig. 3). Therefore, all further experiments were performed 24 h following treatment with FTJ (80 Âµg/ml), which is the optimum concentration without toxicity as described by Choi et al. [22].
Inhibitory effect of FTJ on DEX induced myotube atrophy
C2C12 myotubes were allowed to differentiate for 6 days, followed by DEX (100 ÂµM) and/or FTJ (80 Âµg/ml) treatment for a further 24 h. As a result, when compared with the control group, the DEX treated group exhibited a 52% reduction in cell diameter, whereas the FTJ treated group exhibited a 5% increase in cell diameter. In addition, DEX induced reduction of cell diameter was suppressed by co treatment with FTJ (Fig. 4A and B). The anti-atrophic effects of FTJ were investigated by examining the protein and mRNA expression levels of the muscle atrophy markers MuRF1 and atrogin1/MAFbx in C2C12 myotubes that were treated with DEX (100 ÂµM) and FTJ (80 Âµg/ml) for 24 h (Fig. 5 A and B). Cells treated with DEX alone exhibited a marked increase in the mRNA and protein expression levels of MuRF1 and atrogin1/MAFbx compared with cells in the untreated control group (Fig. 5 A and B). The DEX induced upregulation of MuRF1 and atrogin1/MAFbx was suppressed by co treatment with FTJ (80 Âµg/ml). Therefore, FTJ may be able to inhibit atrophy and induce hypertrophy pathways in C2C12 myotubes. 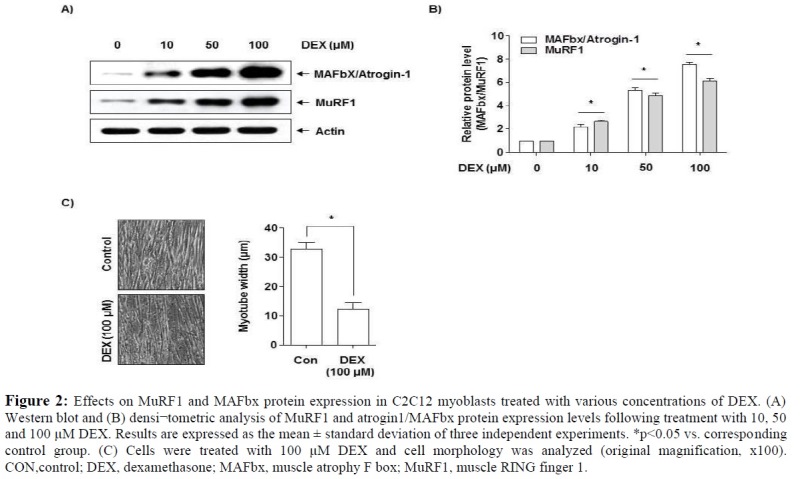 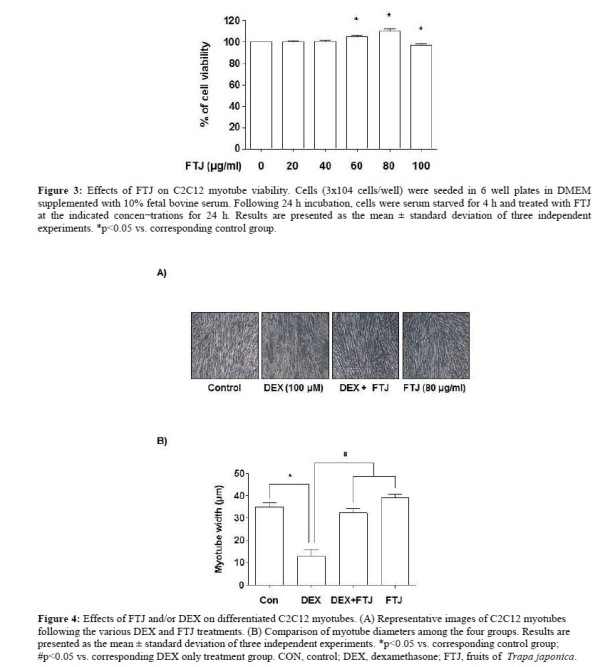 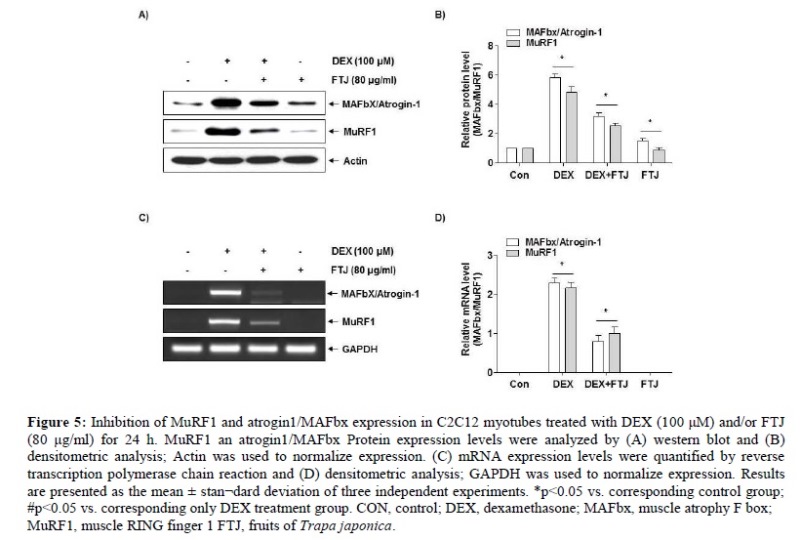 Discussion
Skeletal muscle atrophy refers to the decline in muscle mass and strength that may occur as a result of various conditions, including denervation, injury, glucocorticoid treatment, starvation, cancer, joint immobilization, sepsis and aging [23]. The present study focused on the progression of muscle atrophy caused by aging. In the present study, anti-atrophic effects of the fruits of Trapa japonica (FTJ) were investigated in C2C12 myotubes. C2C12 mouse skeletal muscle cells are commonly used as a model for myotube differentiation to examine the signaling pathways involved in muscle atrophy. The effects of the FTJ on the muscle atrophy in C2C12 myotubes were determined by first culturing C2C12 myoblasts in media containing 2% FBS for 6 days to induce differentiation. Following differentiation, muscle atrophy was induced by treating the cells with DEX. DEX treatment has been previously demonstrated to reduce muscle mass, largely owing to the breakdown of muscle proteins due to upregulated catabolism by the ubiquitin proteÂ¬asome system [24,25]. Administration of high concentrations of DEX has been revealed to cause muscle atrophy in animals and humans [26]. Results from the present study demonstrated that C2C12 myotubes respond to increasing concentrations of DEX (10, 50 and 100 ÂµM) in a dose dependent manner, as revealed by the increased expression of MuRF1 and atrogin1/MAFbx protein levels. Prior to determining the protective effects of FTJ on muscle atrophy, the potential toxicity of FTJ on C2C12 myoblasts was determined using an MTT assay, which revealed that FTJ treatment had no cytotoxic effects on C2C12 myoblasts. We next assessed the protective effects of FTJ by measuring myotube diameter. Compared with the control group, the DEX treated group exhibited a 52% reduction in cell diameter, whereas the FTJ treated group exhibited a 5% increase in cell diameter. Subsequently, the effects of FTJ on C2C12 myotube atrophy were investigated by examining the expression levels of muscle atrophy markers MuRF1 and atrogin1/MAFbx, as they are upregulated in a number of catabolic conditions [27]. Glucocorticoids such as DEX have been demonstrated to promote myosin heavy chain degradation through the activation of the E3 ligase MuRF1 [28].
Therefore, the downregulation of MuRF1 and atrogin1/MAFbx expression may inhibit muscle atrophy. Western blot and RT PCR analyses in the present study revealed that FTJ treatment led to a decrease in the mRNA and protein expression levels of MuRF1 and atrogin1/MAFbx, suggesting that FTJ may potentially be used in anti-atrophy functional foods. In conclusion, the present study provides important new information about the influence of FTJ on DEX induced muscle atrophy. The results provide molecular evidence that the anti-atrophic effects of FTJ are due to the downregulated expression of the muscle specific E3 ubiquitin ligases MuRF1 and atrogin1/MAFbx. Future studies on the anti-atrophic effects of FTJ are required, and should involve identifying the signaling pathways that may be associated with the antiatrophic effects, such as insulin like growth factor 1/Akt and myostatin.

Conflict of interest: The authors declare that there are no conflicts of interest.

Acknowledgments: This research was supported by a grant from the Nakdonggang National Institute of Biological Resources (NNIBR), funded by the Ministry of Environment (MOE) of the Republic of Korea (NNIBR201902104), and the Basic Science Research Program through the National Research Foundation of Korea (NRF) Grant funded by the Korea government (NRF- 2016R1C1B1014724).