While it is clear that both hypertension and hypotension based on systolic and diastolic blood pressures are important determinants of health outcomes at older ages, the importance of systolic and diastolic pressure and their relationship to mortality may differ when their effect is jointly viewed, which is not captured by conventional definitions of hypertension and hypotension. Some people may be low or high in both measures, while others may be high in one but low or normal in the other, and, thus, how combinations of the two blood pressure measures play a role in mortality needs to be examined.

Materials and Methods
Data and Study Participants
Data for this study come from the 2006 to 2016 Health and Retirement Study (HRS). The HRS is a nationally representative survey of the U.S. population collected every two years since 1992. Blood pressure measures are examined every four years, with half of the sample first measured in 2006 and the other half in 2008, and they each have follow-up exams every four years after the first exam. The HRS has collected biomarkers from DBS on the same schedule. We used DBS assays from 2006/2008.

Among the initial 13,125 participants who were ages 50 and over who agreed to the exam where blood pressure was collected (i.e., had a physical exam weight), 12,807 had systolic and diastolic blood pressure measures from either 2006 or 2008. Among these, 2,788 had missing information on antihypertensive medications (N=338), cardiovascular conditions (N=319), body mass index (N=797), total cholesterol (N=1,789), glycated hemoglobin (HbA1c) (N=1,272) and death (N=190). Our final analytic sample is 10,336 with one additional case excluded based on our decision in the process of classifying blood pressure subgroups, which will be discussed in the measures section. Those who had missing information were similar to our analytic sample in terms of age, percent female, use of antihypertensive medications, BMI, lifetime pack years of smoking. Those with missing information were more likely to have lower total cholesterol (194.9 mg/dl vs. 201.4 mg/dl, p<.0001) and higher HbA1c (6.0% vs. 5.9%, p<.0001). Those excluded from the sample had a higher rate of death (29.4%) compared to those in our final sample (27.3%) (p=.0312).

Mortality
Mortality was tracked until 2016. Participants were followed to 2016 or until they died or exited from the survey for other reasons. Exposure time for those who died or exited between waves was assigned as 1 year or half the interval between interviews. Exposure times ranged from 1 to 10 years (average follow-up time of 7.8 years).

Covariates
Sociodemographic information and health conditions at baseline were controlled. Age, gender, education, body mass index, total cholesterol and HbA1c level from DBS, whether taking antihypertensive medication, and lifetime smoking pack years were controlled. These characteristics were selected for their plausible associations with blood pressure and mortality. Analyses were run separately for those with and without baseline cardiovascular conditions defined as having any heart condition such as heart attack,
coronary heart disease, angina, congestive heart failure and stroke. Baseline measures were from 2006 for those whose blood pressure was measured in 2006, and 2008 for those with 2008 blood pressure measures.

Statistical Analysis
First, we examined the relationship between the three components of blood pressure by age. Then, we showed descriptive statistics for the subgroups of systolic and diastolic blood pressure. We ran Cox proportional hazard models that predicted time to death to examine the association of different combinations of systolic/diastolic blood pressure levels and pulse pressure subgroups with all baseline covariates controlled. These models were run separately for those with and without cardiovascular conditions at baseline given that baseline cardiovascular condition may change the effect of blood pressure on mortality.
Finally, we created adjusted survival curves for seven subgroups of systolic and diastolic blood pressures and for three pulse pressure subgroups. Since many covariates influence the relationship between blood pressure and mortality, we adjusted the Kaplan-Meier survival curves for the covariates: age, gender, education, total cholesterol, HbA1c, body mass index, smoking, and status of antihypertensive medication intake. To adjust survival curves, we assigned the mean of each covariate. In all analyses, we used sample weights to adjust for complex sampling design and nonresponse, and all analyses were conducted using SAS 9.4. 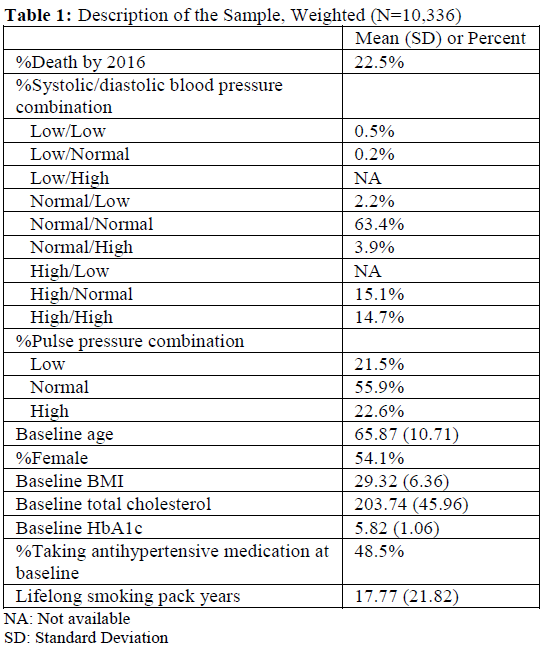 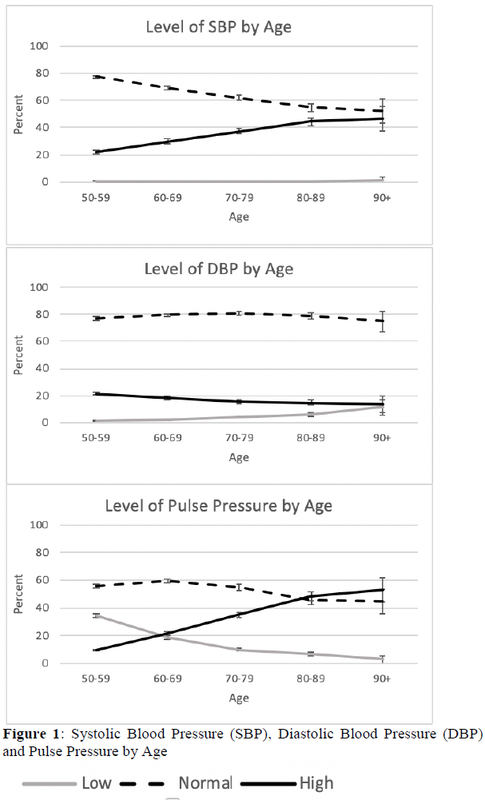 In the model for those with cardiovascular conditions at baseline, those with low/low or low/normal levels of systolic and diastolic blood pressure were 2.34 times more likely to experience mortality at any time after 2006/2008 to 2016 than those with normal/normal (95% CI: 1.45-3.80, p=<.001); those with normal systolic and low diastolic blood pressure had 1.45
times higher risk of mortality than those with normal/normal blood pressures (95% CI: 1.17-1.81, p=<.001). No significant difference in mortality risk was found for normal/high (HR=1.20, 95% CI: 0.73-1.98, p=.466), high/normal (HR=1.11, 95% CI: 0.97-1.27, p=.115) and high/high (HR=1.03, 95% CI: 0.86-1.23, p=.781) compared to normal/normal. In the model with no cardiovascular conditions at baseline, a significant increase in relative risk of mortality was observed between high/high and normal/normal, but no other subgroups. We also examined the effect of pulse pressure on mortality. Our models showed that pulse pressure did not predict mortality risk. Regardless of cardiovascular conditions at baseline, low, normal and high pulse pressure groups did not differ in their risk of mortality when all proposed covariates were controlled. 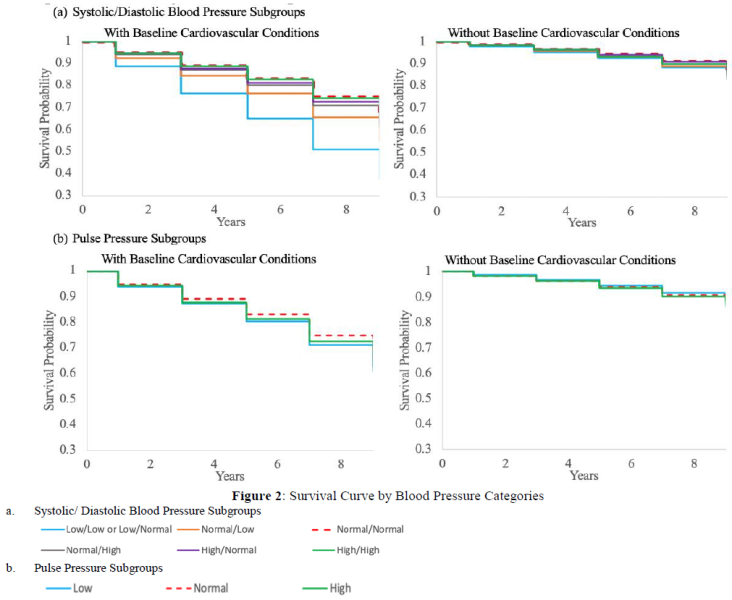 Funding: This study is funded by the National Institute on Aging (P30 AG17265).

Conflicts of Interest: The authors declare no conflict of interest.